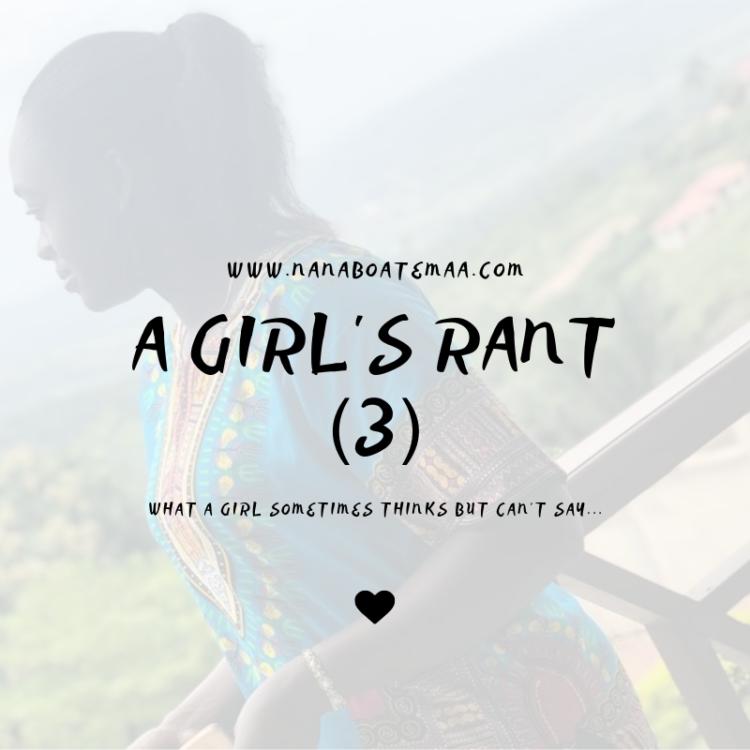 In case you missed the girls’ ranting and raving in the first two parts, here you go!

It had been a while since Manza and her friends had hang out. Naa, who had gotten married recently was now pregnant and wasn’t spending as much time with the girls as before.

Ana and Akwasi had worked out their issues and were preparing to get married.

Kyerewah was currently working on advancing her law career, so hardly had time to “relax”.

Betty had met a guy but wasn’t sure whether it was going to work out or not.

They all realized they were all growing far apart so had planned to meet on Saturday. Frankly, Manza wasn’t sure how their meet-up was going to turn out. They were in touch but really had a lot of catching up to do, and Manza had some news of her own but wasn’t sure whether to tell them yet….

“I’m herrrreeee”, Betty exclaimed, as she walked through the gate. This time they had decided to meet in Naa’s house.
“You always come with a bang”, Manza laughed as she gave Betty a hug.
“You know me”, Betty winked. “And where is Naa?”
“Oh she just stepped inside briefly….she wanted to check if the khebab was almost done.” Manza replied.
“Let’s go and help out?”
“Trust me I have…after a lot of arguing. She barely wanted a helping hand. She passed a comment about her being pregnant not making her helpless.”
“Oooh as for Naa!” Betty laughed heartily. “I’m sure it’s the hormones.”
Manza shrugged, “Maybe.”

Kyerewah came in shortly after, on the phone. “Yes, yes, yes I will have to call you back I’m entering another meeting.”
Manza and Betty exchanged a look, trying their best not to laugh.
“Hey, hey, hey, Kyerewah, today you’re here to relax so drop that phone!” Naa said as she came back out. Manza and Betty nodded vigorously in agreement.
“Unless I turn my phone off o” Kyerewah responded as she turned her phone off and gave them a hug. It really had been a while.
“Manza, today I hope you wrote something else for us.” Kyerewah asked.
“Nope, today we just need to catch up…then maybe, we’ll take if from there” Manza winked.
“Ana is late!” Betty complained.
“Oh yeah, she called that she was on the way. She had just come from a family meeting with Akwasi.”
“Eish wedding bells are ringing paa o” Betty squealed in excitement.
“From the where?” Ana interrupted, shutting the gate behind her. “I’m here aren’t I?” she smiled broadly as she gave her four best friends a hug.
This was going to be a lovely day.

After dishing out the food, the girls settled to talk.
“How is everything Naa?” Kyerewah asked.
“Why me first?” Naa jokingly rolled her eyes.
“Whether it’s you first or not, you’ll still fill us in anyway so the earlier the better”, Betty teased.
“Oh everything is great actually. It’s just that sometimes I feel the days are going by so quickly. I’m already in my fourth month and I really wonder if I can come out of this pregnancy in good shape.” Naa frowned, worried. “But Papa has been very supportive so at least I’m sorted in the craving and foot massage department.”
“But you haven’t gained much weight so what’s your problem?” Ana asked.
“Trust me I have. Sometimes I feel so excited, other times I feel depressed. Do I still look beautiful enough for Papa? Can Papa really wait for me to give birth, get back in shape and all that?”
“I do hear a lot of people saying it’s better to wait a year or two before kids come in.” Kyerewah explained.
“We knew all that but felt we were ready. Remember how I always used to say I want to give birth early so I can get back into shape quickly and look as young as my kids? Well I’m on course. It’s just sometimes it’s tough…but I believe I will carry it gracefully, especially with Papa by my side.”
“Everything will be fine…before you know it, your due date is here.”, Manza said reassuringly…the girls nodded in agreement.

“Enough about me”, Naa said. “Manza, what’s up?”
“Oh me you know it’s nothing much ooo..”
“Is there ever nothing much with you?” the girls exclaimed together in pretend shock.
“I’ve realized you can’t stop smiling Manza…are you sure there is something we don’t need to know?”
“You let’s go and come. I’ll be the last don’t worry” Manza said shyly, hoping they’d change the subject for now.

“Hmmm then let me start with mine erh.” Ana said.
“We’re all ears….”
“You remember that ring Akwasi gave to me?” Ana continued.
“That ring is a stunner mehnnn”, Betty gushed.
“I lost it.”
“You whattt??” Naa, Betty, and Kyerewah exclaimed at the same time, but Manza was silent.
“Ooh don’t worry I found it now” Ana said calmly. “That day I was so frantic I didn’t know what to do.” she explained. “After saying a prayer, Manza’s name came to mind so I gave her a call.”
“Eeei why not any of us?” Naa, Kyerewah and Betty queried at the same time.
“You are always busy Kyerewah”, Ana teased, “and I also didn’t want to bother Naa. As for Betty, her line was so busy I was convinced she was chatting with her new boo.” The girls laughed hysterically.
“Anyway, even though I’ve found the ring I wanted to tell you about it because of Manza’s response. I thought she was going to ask me plenty questions, but she instead said she had something for me and will call me back in a few minutes…before I could say jack, our sweet blogger had started reading to me. I just felt you needed to hear this…you never know who will lose their ring oneday” Ana joked.
“Manza I thought you said you don’t have any piece for us today?” Kyerewah teased.
“Ahh it’s not me reading this time ooo…it’s Ana” Manza shrugged, smiling. She was actually surprised and touched that Ana had decided to share their conversation.
“Okay let me read it”, Ana continued. “I recorded it as she read to me over the phone, and wrote it down later….