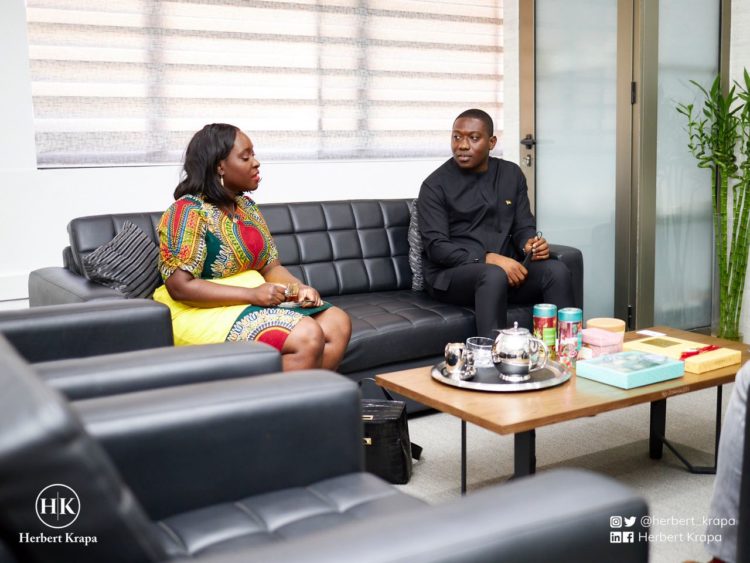 On Friday 12th November 2021, Deputy Minister for Trade, Hon. Herbert Krapa hosted the British Labour MP for Erith and Thamesmead and Shadow Exchequer Secretary to the Treasury, Hon. Abena Oppong-Asare, in his office. They had fruitful discussions on impactful issues such as trade, e-commerce and the post-covid global economy.

Hon. Abena Oppong-Asare is one of the first female British-Ghanaian MPs, elected in 2019. In her own words, “I was once told that the chances of someone like me getting a job in Parliament were very slim, and to not even bother trying. The unfairness I felt about this drove me to challenge the barriers that I faced as a black woman, and I was honoured and privileged to be elected as Member of Parliament for Erith and Thamesmead on 13th December 2019.”

Her visit to Hon. Krapa’s office serves as inspiration to many, including the youth, who can strive to emulate them.

-Hon. Oppong-Asare paid a courtesy call to the Deputy Minister of Trade during her visit to Ghana.

-They discussed matters regarding trade, the economy after COVID, e-commerce, and the way forward.

Statistics reveal that the population of Africa’s youth is likely to grow by 42% by 2030. There is also a 40% employment to population ratio for the youth. As such, there are both challenges and opportunities worth considering to develop strategies in response.

Young People Too Can Do It

Hon. Krapa used this visit as an opportunity to highlight the message that young people can do it. This is an exciting reminder for young people that the youth can make an impact wherever they find themselves. It also highlights the fact that women can make a difference and should aspire to play a significant role in society, not shying away from holding political offices.
The fact that two different cultures, both Ghanaian and British also came together for this meeting lends credence to the power of international relations and how development takes a concerted effort.

Hon. Herbert Krapa is passionate about the youth and takes a keen interest in initiatives that champion the cause of the youth, innovation and development. As he stated during the just-ended 2021 Youth Connekt Summit, Africa’s youth face similar challenges including lack of jobs, difficulty in accessing credit, etc. As such, it’s essential for leaders to implement measures to address these issues.