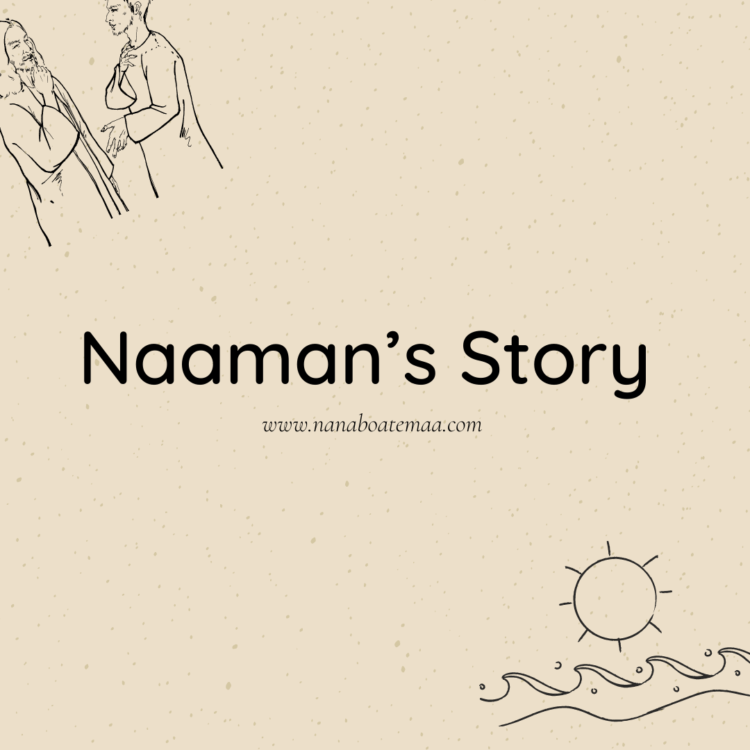 It’s been ages since I wrote, but in the meantime, I have been exploring another aspect of sharing lessons and inspiration with you, through my YouTube channel (the Growth Process). Have you subscribed yet? 😊

Anyway…at a point I thought I had permanent writer’s block, but this morning it hit me that sometimes a silent period doesn’t necessarily mean you’ve lost it…it could be a moment of growth and renewal and what we do with that period of silence really matters. Sometimes we will be required to move, sometimes we will need to be still and wait for instructions (though it can be a bit frustrating at times).

Before I lose track of what I was going to say, let me jump right into the story for today; the story of Naaman. You may have probably heard this story a couple of times, about a rich and highly favoured commander who had a setback in his life…leprosy. Let’s start with a little background of who Naaman was:

“Through him, the Lord had given Aram great victories.” (2 Kings 5:1a)

God had used him to do great things and he was remembered for the victories he had won for his king and people, a reminder that God can and will always use people in the way He pleases…we don’t need to “reach some level”, but rather have a ready heart and prepare while we wait. But there was a catch:

“Though Naaman was a mighty warrior, he suffered from leprosy.” (2 Kings 5: 1b)

There is always that one ‘but’…that one snag that sets us back or even makes us feel inadequate; that condition or appearance we’re not so comfortable about, that past experience we had, or that shortcoming of ours that makes us feel we pale in comparison to others. Does that make us any less special or usable?  Absolutely not!

That imperfection could become a tag others refer to us by, but what matters is whether we accept it or focus on who God created us to be. Naaman may have had leprosy, but he was so much more than that.

Now let’s talk about a special girl who comes into the picture:

“At this time Aramean raiders had invaded the land of Israel, and among their captives was a young girl who had been given to Naaman’s wife as a maid. One day the girl said to her mistress, I wish my master would go to see the prophet in Samaria. He would heal him of his leprosy.” (2 Kings 5:2-3)

Imagine being taken away from the environment you’re used to, to stay with absolute strangers as a servant. The girl could have had a nasty attitude and it would have been understandable. Instead, she tried to look for a solution for her master. Clearly, she had a good relationship with her masters and was a bold lady. Sometimes in order to see change, we will need to speak up (let’s not forget to pray for our brothers and sisters in Nigeria). Her masters probably treated her like their own, making it easier for her to feel a part of them.

How many times haven’t we encountered people who were not like us in one way or another, and how well did we treat them? Everyone deserves to be treated with respect and love (even though some people can be quite annoying at times 😀 ), and we never know how God is going to use someone in our lives. You could also be the solution to someone’s problem…but if you’re only focused on what you have lost and how inconvenient and unfair things have been, you may end up missing out on an opportunity to be a blessing to someone.

Now, the Naaman story is quite a lengthy and detailed one, but let’s fast forward a bit:

“So Naaman went with his horses and chariots and waited at the door of Elisha’s house. But Elisha sent a messenger out to him…Go and wash yourself seven times in the Jordan River. Then your skin will be restored…But Naaman became angry and stalked away. I thought he would certainly come out to meet me!” he said.” (2 Kings 5:9-11).

Somebody is very angry here! How could he, a wealthy man of great stature be sent to some common river like a nobody? Elisha’s apparent indifference to his situation must have infuriated him! But we need to pause right there and think…one thing I have personally noticed is how pride subconsciously creeps into our hearts sometimes without us knowing it. We believe we are this or have this or did this a certain way, so we must see some specific results come hell or highwater! But what if God had a completely different plan and strategy? What if our answer could be in a “something or someone small”?

Some situations, like the coronavirus pandemic, have a way of reminding us of the things that truly matter; there will be times we will have to step back, be humble, allow God to clear up our vision to see what truly matters and appreciate the unexpected solutions and people that come our way.

After much convincing from Naaman’s servants:

“He went down and dipped seven times in the Jordan…and his flesh was restored like the flesh of a little child, and he was clean.” (2 Kings 5:14)

I can’t imagine how Naaman felt; no doubt a mixture of surprise and relief. The apparently over-simplistic solution had brought him tangible results! We sometimes end up complicating the very things God intended to be simple. He is a God full of surprises and creativity, but He is also a God of simplicity, who can bring amazing things out of the most mundane.

Naaman’s health was restored, and with that I believe came some faith in Israel’s God. What solution are we looking for? And when God does bring the solution our way, will we see it or miss it because we have a preconceived idea of how God is going to “come through for us?” There are certainly a lot of lessons to learn from Naaman’s experience, and knowing me, if I don’t stop now, I may end up writing a whole book! 😀

So, are you Naaman the leper or Naaman the commander? Do not allow your condition to define you or become your life-long label. You are so much more than the situation you’re facing now…and God definitely has a bigger plan in mind for you. How are you defining yourself today?